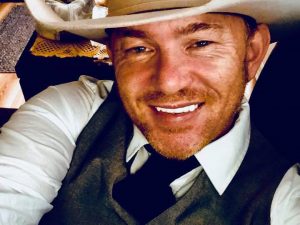 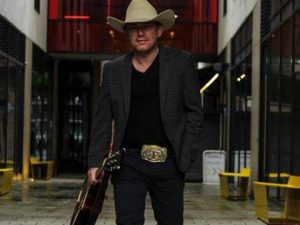 Levi Coby was born October 14th in Aithry Castle, Stirling, Scotland. He is the youngest of 3 children, an older brother and sister. After a life changing experience, Levi started writing and singing. His first song called “Teddy Dreams” became so popular that Levi decided to continue to write and sing more and has 100+ songs he has written. People told him he had a gift. Levi is happiest to just write and sing, make music, see a happy tear or a smile on someone’s face.
Levi Coby was brought up with Johnny Cash and Christian music. His father was a fan of Jim Reaves. Levi sang in church with his mother until she passed away recently.
Some of Levi’s songs are “Cowboy Up” whom he wrote for his father before he passed away. It was his way of saying he was going to Cowboy Up and make him proud. “Teddy Dreams” he wrote for his 2 children for he nearly died in his car accident. “Have A Little Faith” was for his mother as anytime Levi was down she would tell him “Have a little faith. The Lord has a plan for you.”
Some of Levi’s idols are Tim McGraw, Keith Urban, Taylor Swift, and many more. It is his goal to make music, sing and be heard worldwide making his fans proud!
Levi Coby is a nominee for the Josy Awards 2018
Levi Coby has had many great reviews and compliments. He played The Perth Theatre in Scotland. He was interviewed and written in the “Perth Advertiser”. He has also played several times at “The Rob Roy Club in Stirling. Levi Coby has also played at “The Sword Hotel”, “The Wallace Club”, and many nights he played “Mardi Gra Louisiana. You can find an article in the Country Classics News… Discover singer songwriter Levi Coby